Have you ever noticed that the length of a beach can be deceiving?

It looks like you are so close to the end of it, but it somehow magically keep going.

Well we certainly noticed that during our adventure to the other side of Playa Grande! (had we clued in to the name, we might have known what we were getting in  to!)

Playa Grande is right next to Playa Tamarindo, just on the other side of an estuary. Shaun heads there most mornings, because it’s often where the good surf is. During our last trip, we even stayed there for a week. Our goal was to not only get to Playa Grande, but hike all the way to the other side of the beach.

That is where we were heading!

So, we packed up Titty Tonka with water and some energy bars, and headed off. First things first, get to the estuary, and find a boat to take us across.

For 500 Colones, or 1 dollar each they’ll take you across. When Shaun surfs in Grande, he usually just paddles over on his board. Sometimes when the tide is right you can wade across as well. But with a high tide, a backpack and no board, the boats were our only option.

Boat rides are fun, so are photobombs!

We got to the other side and started our trek.

The view from the Grande side of the estuary

The first thing I wanted to see was the house we stayed in last time we were here. Shaun had just proposed to me, the week prior, so I spent the majority of my time there reading Costa Rican bridal magazines!

There it is nestled in the trees, didn’t want to go to paparazzi on the people staying there!

So then we walked…and walked…and walked. I’m not gonna lie, I may have been afflicted with a little bit of hot hanger mid way through. Despite my grumps, 6.5 km later, we got to the other end.

That’s where we came from!

We found a log to sit down on to take a much deserved rest. Shaun drank his warm beer while I ate my energy bar and played around with the panorama settings on my phone.

took this one while standing in the ocean!

So, after quenching our thirst, resolving the hangry’s and reapplying suncreen, we started on the long trek back. Lucky for us we had a bit of cloud cover and a breeze on the way back so it wasn’t quite so hot. We made it back to the hostel safe and sound. Needless to say, we both slept very well that night!

Have you ever embarked on a journey that ended up as way more of an adventure then you thought?

After two nights of rice and beans, Shaun and I were ready for an evening out. So we dubbed it a date night, and hit the town!

Please note that I actually blew dry my hair and bangs! It was a big big step, and likely one of the only times it will be mild enough for me to pull it off without being a grease ball by the end of the night!

We started date night with a cervasa on the beach. The sunsets are just to good to miss. Afterwards, we headed to Kahiki, Sports Bar and Restaurant. Shaun and I had been to Kahiki on our previous trip, and really enjoyed it. Kahiki is on the road to Playa Langosta, so it’s sort of out of the way a bit, but it really is worth the jaunt.

We arrived shortly after 6, and we had the place to ourselves (aside from the cows that were roaming the streets out front). We scanned the menu looking for delicious items that we wouldn’t be able to make ourselves. It didn’t take us long to decide what we wanted. 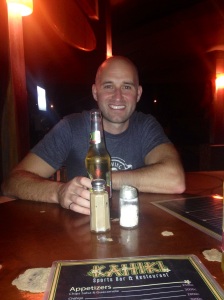 He’s smiling cause he knows he has a burger coming!

Shaun knew before he even left the hostel that there was a burger and fries in his future, and he was pretty darn excited about (well as excited as Shaun gets!). I opted for the seared tuna and avocado salad. I love all the fresh seafood here, and since Shaun’s not a fan, I want to indulge anytime I have the chance!

So excited not to be eating rice and beans tonight!

We soon realized that the benefit of fending for ourselves with hostel food, is that when you do get the opportunity to go out, everything tastes AMAZING! I feel like I’ve never had seared tuna like that before. I don’t think we spoke one word during the meal, except for the occasional moan of deliciousness.

If you are travelling in Tamarindo, I would highly suggest Kahiki. The chef is amazing, and they often have games playing for those who are into the whole sports things. If you can’t make it for dinner, they have amazing breakfasts too!

After dinner we realized that we still had time to hit up another happy hour before 7. We headed back to the place we went to on night one, Wild Panda. I don’t think there is a night that we’ve been out that we haven’t stopped in there. Their focus is on healthy food and drinks, so of course I’m all over it. Their rum and pineapple is literally just that. Rum, Pineapple and ice…maybe with a dash of amazingness!

we opted to try the vodka watermelon

As tempting as it was to polish off another one of Junior’s delicious cocktails, the budget beckoned us back to the hostel. Bearly Bear met us a the door. The three of us shared a beverage on the balcony before turning in. 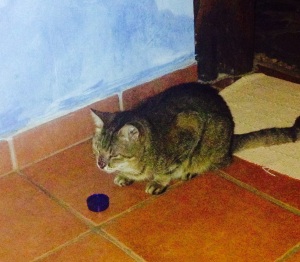 Water for her, Imperial for us

She was pretty thankful not to be drinking pool water!

I cropped out her nether regions for your viewing pleasure!

After a quick snuggle, we called it a night. It was so nice to get out and about! Back to, hostel food, beach walks and netflix for the next few days though. Gotta stick to the budget!

How do you budget when you travelling?