I have to say, I really loved Monteverde. After getting out of the hustle and bustle of the tourist scene of La Fortuna, this quaint little town was way more my scene.

That being said, there certainly was no shortage of things to see and do there!

Although we were only in town for three days, they were very busy and full of all sorts of adventures. Despite the hectic schedule, I did manage to track down a couple of my “Favourite Places” for you to check out. 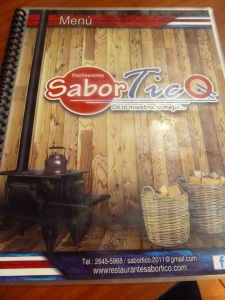 Be prepared, their menu is HUGE

Sabor Tico: If you’ve been following the blog closely, you may recognize this name. Yes in fact, there is a Sabor Tico in La Fortuna as well, and it was also one of our favourite places…well it was actually Shaun’s favourite place, as I never actually ate at it.

This Sabor Tico is very different, and having experienced it first hand, I can attest that it a truly delicious place to dine. Sabor Tico is like a traditional soda gone mainstream. Their menu is chalk full traditional Costa Rican favourites, but their restaurant area is a little fancier then what you would find in a regular soda. Don’t worry though, cause it tastes like mama is still cooking up a storm in the kitchen, because everything we ate there was unreal.

On the night we visited we went all out. I was so excited to see they had tamale’s on the 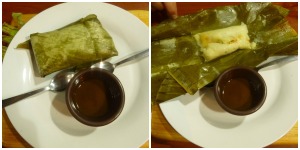 menu, because I hadn’t seen any during our trip yet and at only 900 Colones, how could I resist? Tamales are a dish famous for being served at Christmas here in Costa Rica. The base is masa, usually made from a corn flour dough, then there will be meats, cheese, veggies or sometimes even fruits inside. All of this deliciousness is wrapped up in a banana or plantain leaf and steamed or boiled.

I can see why people would eat these at Christmas, it’s like opening a present when you eat them! Ours was full of chicken, and veggies. We combined it with a little Lizano and it was an awesome little appy to share.

Woosh, What a Tamale Tangent! 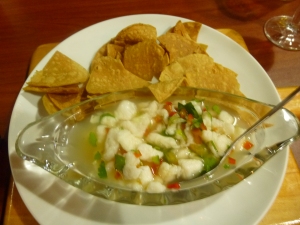 The rest of our meal was just as amazing. I got some ceviche, while Shaun got a Fajita. Both were fabulous!

Sabor Tico is an awesome place if you are looking for some delicious Costa Rican favourites. They are so popular, that they actually have two locations. The original location is in Santa Elena, while the new location, the one we went to, is in Monteverde. They are only 2km apart so you could hit one up for lunch, and one for dinner!

Orchid Coffee & Tea Shop: I took one for the team again here in Monteverde, and checked out several coffee places to see which ones were the best. The things I do for you guys. Orchid Coffee was my first stop, because it had such a high rating on trip advisor. It did not disappoint.

Despite being in Monteverde for such a short stint, I somehow managed to indulge in several Cappuccino’s at this establishment. I would suggest trying the Spiced Cappuccino with Cinnamon, Nutmeg…and maybe Ginger? Regardless, it was a really nice twist on my traditional coffee choice.

Desafio Monteverde: Although I am a little biased, because I absolutely love this company, Desafio Monteverde was still one of our favourite places. The staff are incredible, and will set you up with everything you need to make your stay in Monteverde beyond memorable.

Beyond the tours, the building itself is awesome as well. They offer the only truly “Free” activity in Monteverde. They have a hummingbird and monkey garden in the back of their property that is open to the public. Also, there is an amazing coffee shop upstairs that roasts its own beans (you know I’ll take any opportunity to pop into another coffee shop!)

So whether you are looking for a tour, wanting to see some hummingbirds/monkeys, or just wanting to meet some really awesome people, stop by Desafio Monteverde, and tell them I sent you!

That’s a wrap on another edition of our Favourite Places. Check out other posts in this series, and as always feel free to pop us any questions in the comments below or on Facebook.