After the success of our Panamanian Beer taste test, it seemed only fitting that we imbibe in another round in Nicaragua. I would like to thank Colleen for stepping up to the plate and being our third judge in this little adventure.

So without further ado…The beers of Nicaragua

Kate: Watery but still hoppy with a little after skunk. Tastes a big lighter then the other Nicaraguan beers. I could drink a few but would still prefer something lighter and with a lower alcohol content

Shaun: Pretty good, but bit of a chemical beer taste. Something may be a bit off with this one.

Kate: Way thicker and hoppier. Hits you between the eyes like its saying “drink lots of me and I’ll make your morning a doozy.” It has a bit of a skunky aftertaste. Tastes like something I would drink out of a red plastic cup at a party.

Colleen: More like a Molson Canadian. Heavier then the frost. Don’t care for the chemically after taste

Shaun: Good name (Victoria), Pretty Good. Could slam back a few, less after taste then the frost but would need to be very cold. It’s pretty bad when warm

Kate: Stronger smell. Thick, like molasses beer. A hint of lime at first. I’m not opposed to this beer but would only drink one on a really hot day and only if it was ice cold. Nice to not have that skunky finish though.

Colleen: Heavier than the other two. Harder to chug!

Shaun: Seems like a heavier beer in comparison but refreshing. Good but not as poundable. More of a winter beer then hot climate beer. 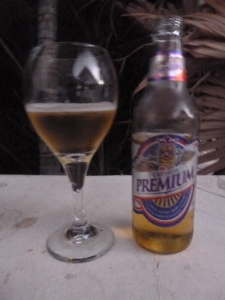 Kate: Stinky! Tastes like water compared to everything. I keep sipping it up thinking there might be more to it, but its just bubbly yeast water. Let’s be honest, this is a Kate beer. Fluffy, light, nothingness. Perfect for my delicate dainty palate

Colleen: Not sure if this is even from Nicaragua, what does “Made in Central America” even mean. Not a huge fan. Overall would prefer anything else

Shaun: Judging by the name it must be good. Not very good. Reminds me of a Pacific Pilsner…Terrible

So there you have it! We knew going into this that Nicaragua is certainly not known for its beer. That fact was defininetly reinforced with our taste test. It should be advised, that beer taste tests often result in situations like this.

Yes, that is a delicious street side burrito. I regret nothing!

The Costa Rican beer taste test will be finale. We are waiting for the perfect moment though, because we 9 different varieties to try, we may never recover!

Are you in Costa Rica and want to partake in the finale beer taste test? Message us on Facebook!

4 thoughts on “Beers of Nicaragua: A Taste Test”