Today we got another of our “Must Sees” checked off our list! Our visit to the National Park in Manuel Antonio is complete, and was a huge success. 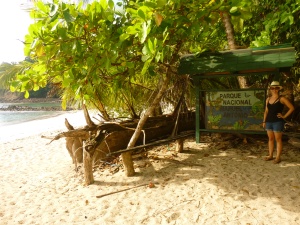 Our morning started bright and early. The park opens at 7, so we wanted to beat the rush. This is actually a good tactic for several reasons. One, the park only admits a certain number of people per day. In high season, going later in the afternoon could result in being turned away. Two, it is way cooler. There is a 25 minute hike into the park, and the combination of sun, and jungle can make it a scorcher.

We took the local bus to the park entrance. It costs us a little over a dollar for the two of us. A steal if you ask me! The bus runs every 15 minutes so no matter where you are staying in Manuel Antonio it is a great way to get around. The roads are very hilly, windy, and without sidewalks, not the safest for strolling!

The bus drops you off in front of Playa Espedilla, on the main drag in town. It’s about a 5 minute walk around the back of the town to the park entrance. Along the way there are lots and lots of people trying to sell you tours in the park. Now, it’s my personal opinion that these tours aren’t worth it. With all the wildlife roaming around the park, you’re going to see lots of exciting things without having someone point it out to you. I also like the challenge of creeping around slowly, and stopping to look around whenever I hear something.

That being said, if you are dying to see every piece of flora and fauna Manual Antonio has to offer, then by all means hire away! Just make sure your guide has a certified park badge so you know they are the real deal. Most guides I saw were charging about $25.

Shaun, and I each paid our 10 dollar entrance fee, and started our guideless hike. I did creep on a couple tours just to see if they were pointing out sloths, those things are impossible to spot on your own!

Although we didn’t see sloths, we did see tons of gigantic butterflies on the way. These things were the size of a saucer, and super colourful. They reminded me of the butterflies on wires that you would see on the Muppet show. They would slowly flop around the trail, heading straight for you. I may have squealed a couple times. Here are my three best attempts at trying to capture them! 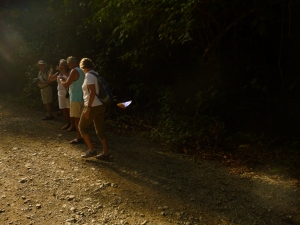 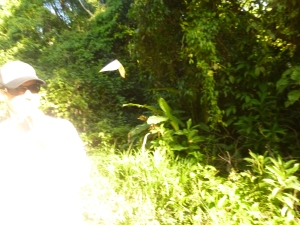 Prior to entering the park, the ranger had told us the first beach was closed because there was a crocodile. When we arrived at the beach, people were taking photos. We hung back, and decided to just head straight to the second beach. There was just too many people, and we knew the beach was closed. We started down the trail, and took a moment to stop and look at the first beach one last time. I snapped a photo, and we were just about to leave when Shaun noticed the actual reason for beach closure. It wasn’t a crocodile warning; it was a gigantic crocodile lounging in the sun right in the middle of the beach. Pretty good reason to close the beach if you ask me! 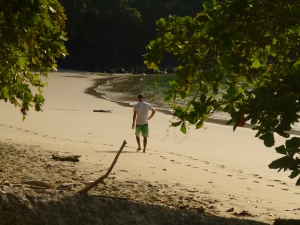 Shaun going in for a closer look. Makes me nervous just looking at this photo!

I took a couple pictures from the trail, and Shaun asked if he should get in there for perspective. We were pretty far away, so I figured he would just walk in front of the camera, but no. He marched right towards the ole croc. He kept looking back at me, and I kept motioning for him to stop, but he went a little closer anyways. I nervously snapped some photo’s, and motioned to him to make the ole croc jaw motion with his hands. Anything for a cheesy photo op. I was so thankful when he started heading back in my direction. 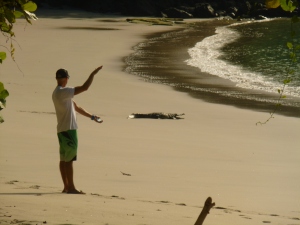 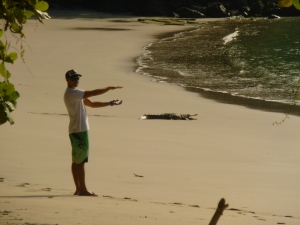 We think we’re so funny…

Of course, he wanted to take a look at the photos right away, and deemed them way too far away. So, he grabbed the camera, and headed out again. I could barely watch. At this point there were a couple other tourists starting to get a little braver, and getting closer for photos. I was pleased to see Shaun didn’t get as close to the rest of the people. He snapped a couple of amazing photo’s and headed back. 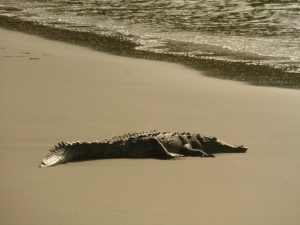 Working on his tan lines 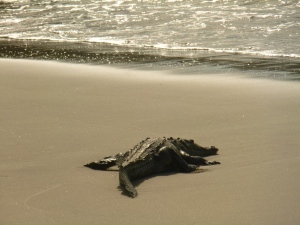 From this angle, I can totally see why Croc’s are often mistaken for sea monsters!

I think that is one really important thing to keep in mind about Manual Antonio Park. You are literally surrounded by wild animals, and you need to remember that you are in their home. Keeping a safe distance, and avoiding direct contact is really important, and a rule that many tourists seem to forget. I’ve read a lot of blog posts that talk about how much of a problem it is becoming. It’s something to keep in mind if you ever visit the park yourself.

But I digress…With our infamous croc photos, we headed to the second beach to check out the water. There were no monkeys out, which seemed odd, because last time I visited the park there were monkeys everywhere. I chalked it up to the fact that it was only 8am, and they were all still asleep., Since it was still fairly cool, Shaun and I decided to go on one of the short hike’s the park has to offer. I was on a hunt to find me some monkeys.

And so you might ask…did we find the monkeys I so desperately wanted to see?

You’ll just have to wait to find out. Tomorrow on Hostels and Hot Rollers- Manuel Antonio Part 2

What do you think about allowing tourists to interact with wild animals? Any family out there want to share their thoughts with Shaun about his love of being close to crocs 😉